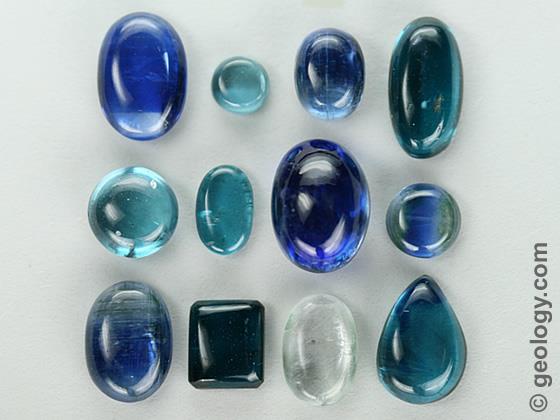 Kyanite is a metamorphic mineral that most often forms from the high pressure alteration of clay-rich sedimentary rocks. It is found in the schists and gneisses of regionally metamorphosed areas and less often in quartzite or eclogite.

Kyanite's typical habit is a bladed crystal although it sometimes occurs as radiating masses of crystals. Kyanite is often associated with other metamorphic minerals such as garnet, staurolite and corundum.

Kyanite specimens have a variable hardness. The long crystals have a hardness of about 4.5 to 5 if tested parallel to the length of a crystal and a hardness of 6.5 to 7 if tested across the short dimension of a crystal. The mineral was once commonly called "disthene" which means "two strengths".

Many Industrial Uses of Kyanite

Kyanite is used to manufacture a wide range of products. An important use is in the manufacture of refractory products such as the bricks, mortars and kiln furniture used in high temperature furnaces. For foundries, the molds that are used for casting high temperature metals are often made with kyanite.

Kyanite is also in products used in the automotive and railroad industries where heat resistance is important. Mullite, a form of calcined kyanite, is used to make brake shoes and clutch facings.

Use in High Refractory Strength Porcelain

Kyanite has properties that make it exceptionally well suited for the manufacture of a high refractory-strength porcelain - a porcelain that holds its strength at very high temperatures. A familiar use of this type of porcelain is the white porcelain insulator on a spark plug.

Kyanite is also used in some of the more common forms of porcelain, such as those used to make dentures, sinks and bathroom fixtures.

Use in Abrasive Products

Kyanite's heat resistance and hardness makes it an excellent material for use in the manufacture of grinding wheels and cutting wheels. It is not used as the primary abrasive, instead it is used as part of the binding agent that holds the abrasive particles together in the shape of a wheel.

Expansion of Kyanite When Heated

Kyanite, unlike most other minerals, can expand significantly when heated. Depending upon particle size, temperatures and heating conditions, kyanite can expand to up to twice its original volume when heated. This expansion is predictable. In the manufacture of certain refractory products, specific amounts of kyanite are added to the raw material (which shrinks during heating) to maintain volume in the finished product.

Kyanite Use as a Gemstone

Occasionally, clear and colorful kyanite is encountered. This material is highly prized by those who cut gemstones. It can be cut en cabochon, faceted, or used to produce beads and pendants. Kyanite is considered to be an "exotic" gemstone because it is not often used in jewelry.